A video recently released capturing Colorado law enforcement discussing shooting a Hells Angel during a traffic stop without cause was not a mere threat. Although law enforcement has made every attempt to conceal the truth through fictitious statements to the mainstream media, a Colorado Sheriff attempted to kill another unarmed Hells Angel a little more than a year later by shooting him in the stomach while serving a warrant in late 2019. Until now, this story has not been fully told. The victim was in a coma following the shooting while his location was being being hidden from his attorney and family by law enforcement for 13 days before a court order was granted by a judge, not surprisingly at the absurd objection of prosecutors and law enforcement. The situation was very uncertain. But recent revelations confirming a broader policy of targeting Hells Angels with an explicit willingness to kill without cause demands widespread attention and public outrage. So this story must now be told.

The National Council of Clubs (NCOC), representing the legitimate interests of motorcycle clubs and their members nationwide, stands in unified opposition to law enforcement targeting and attempting to murder members of motorcycle clubs. The NCOC hopes lives are saved by holding the officer(s) involved accountable, both for the shooting and the blatant lies relayed to the public in an obvious attempt to downplay the severity of law enforcement actions. Motorcycle Profiling is real and the loss of life is the ultimate impact.

The Basic Details While serving one of 19 warrants in Jefferson County, Colorado on November 7th, 2019, a SWAT team officer shot a member of the Hells Angels Motorcycle Club (HAMC) in the stomach with a shotgun round intended to breach a locked door (not shoot a human being) when he opened the door unarmed to peacefully greet approaching officers. Independent of the many unanswered questions that remain, the Jefferson County Sheriff’s Office (JCSO) reported that the suspect sustained a non-life threatening injury. That was a blatant lie. The victim almost died. 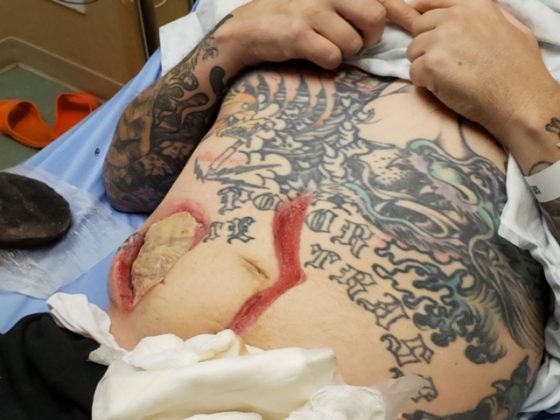 Although Dusty stabilized after being in a coma, the fact that the injuries he sustained were life-threatening is an important detail that the public has a right to know and that law enforcement has an ethical duty not to lie about. Adding insult to injury, before he was fully recovered, on Christmas Eve 2019 law enforcement officers rushed into his already secured hospital room, placed him under arrest, and announced that he was being charged under the state organized crime law. They then took him to Denver County jail in a wheelchair. Dusty bonded out a few days later and is at home with an ankle monitor awaiting trial.

Expert Opinion.
Why was it necessary to fire a breaching round in the first place? Dusty has no criminal record and he has never been convicted of a violent crime. He was home alone with his wife and obviously had no intention of resisting based on the fact that he opened the door unarmed to greet them. What is the probability of the officer firing a breaching round at the exact moment Dusty was opening the door? Based on the opinion of one combat military veteran with extensive experience in breaching residential dwellings, it’s highly improbable. Bobby Colella, retired Army 1st Sergeant and NCOC participant, breached countless residential dwellings in a war theater and not once was an occupant struck by a breaching round when they opened the door. How far away was the Sheriff when he shot the breaching round? Colella explains that “breaching rounds of the sort used in this instance are low velocity and must be fired at very close range. Within a foot or two. It makes more sense that the officer was startled, despite training to control impulsive deadly force responses when startled or stressed.” If the sheriff deputy was farther away, that makes a non-accidental shooting even more likely. From farther away, shooting Dusty, not breaching the door, is the only logical intent of the shot.

A Call To Action
What’s happening in Colorado is a microcosm of a national epidemic. The evidence is clear. Under the status quo, motorcycle clubs are targeted as a matter of policy to the degree that killing a Biker without cause is an acceptable method of law enforcement. Discrimination and profiling against motorcyclists demands immediate public policy attention at the state and national level. The issue is literally one of life and death.