Home News Pagans Charges Dropped After Video Shows Excessive Force
November 19, 2018December 18, 2019By Motocycle Profiling Project
The National Council Of Clubs (NCOC), dedicated to defending the political, legislative and legal interests of motorcyclists across America, joins those voicing disgust with the videotaped actions of undercover and uniformed Pittsburgh Police officers inside Kopy’s bar on October 12th, 2018, which resulted in the arrests of Pagans Motorcycle Club members Frank Deluca, 36; Michael Zokaites, 38; Erik Heitzenrater, 28; and Bruce Thomas, 61. Video released by numerous news outlets shows officers brutally beating one of these members well past the point of being subdued before being arrested and charged with aggravated assault, conspiracy and riot as a result of the fight1. On November 14th, all charges were dropped against all four defendants. Furthermore, the FBI announced an on-going investigation into the incident.2

In the short-term, the officers involved should have their employment terminated and all officers involved should be held civilly and criminally liable. In the long-term, legislative solutions prohibiting discrimination and profiling would protect against civil liberty violations, and therefore exposure to civil liability, by reducing the probability of such incidents occurring in the first place.

The NCOC also supports the bar owner’s constitutional right to pursue an occupation, which was infringed by officers when the owner was told that he must ban motorcycle club colors in his bar following the brawl. Agents of the government such as law enforcement officers are also constitutionally prohibited from coercing or pressuring a private establishment to discriminate.

A Story of Excessive Force

There are differing accounts of what started the brawl. The bar owner, for example, reports that the police were the agitators and aggressors. But regardless of what started the fight, punching a completely defenseless Frank Deluca in the head and face 23 times while his arms were being held and his hair pulled back, as irrefutably shown in video, is unconstitutional use of excessive force even if there was probable cause for an arrest, which, according to defense attorneys, eyewitness accounts to local news media, and the recent dismissals, is highly improbable. 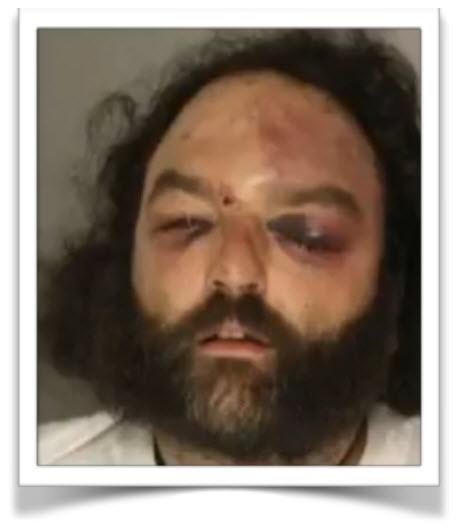 “Without a doubt, the most controversial issue in American policing is the use of force by police officers. On too many occasions, we have seen newspaper headlines reporting that an individual has been brutalized or, worse yet, killed by the police. The consequences of excessive and deadly force have been severe, affecting both police organizations and the communities they serve.” 3 The events of October 12th are a perfect demonstration.

Independent of the excessive force issues, the Pittsburgh undercover officers involved continued their streak of constitutional violations after the beatings and arrests. As published by Channel 11 News/WPXL on October 24th, 2018:

The owner of Kopy’s, who was doused with pepper spray, said after the fight, a police lieutenant  blamed him.

“The lieutenant stated that this was my fault for letting them in with jackets. I responded the bikers did not cause the fight, and the lieutenant began screaming to me about the bikers being dangerous and referenced that they had guns and that someone could have been shot or killed.”

The owner said the lieutenant also told him to post a dress code and that he doesn’t want to see any bikers in his bar.

It is settled law that agents of the government are barred from acts of discrimination. Wearing motorcycle club colors expressing associations falls “squarely within the protective umbrella of the First Amendment…any action to punish or deter such speech…is categorically prohibited by the Constitution.” 4

What Should Be Done?

The actions of the officers at Kopy’s bar were simply egregious and inexcusable. Aside from the direct harm caused by their conduct, these officers have exposed the department, government, and taxpayers to huge civil liability damage for irrefutable violations of the constitution.

In the short-term, the NCOC believes that all officers involved should ultimately have their employment terminated when allegations of excessive force or coercion are confirmed through investigation and due process. The NCOC supports the efforts of those violated to pursue relief through civil rights claims.

Longer-term, the NCOC believes that legislative solutions to address the issue of motorcycle profiling, combined with basic training and education related to current constitutional prohibitions against government discrimination, would reduce similar incidents of profiling and discrimination going forward.

This incident is further confirmation that video is the best weapon available in the fight against motorcycle profiling and discrimination. Without video, law enforcement’s version of events would likely go unchecked and 4 individuals would still be facing aggravated assault and riot charges.

Indeed, video has been the key factor in many motorcycle profiling successes. Video is incontrovertible in many cases. In Washington State, video of state troopers crawling through the bushes on the grounds of the Capitol during biker day at the Capitol convinced legislators that motorcycle profiling had followed us to the very steps of the Capitol. In Maryland, the other state with a law addressing the issue, video obtained through a public information request proved that the state police participated in a mass profiling stop,  despite complete denial.

Video is often critical in individual incidents of profiling as well. In Kansas City, an off duty officer moonlighting as a security guard was caught threatening a 1% club member with arrest for trespassing because the Quick Trip didn’t allow 1%’ers on their property. Video of the incident led to the officers  termination from both Quick Trip and the KCPD.

Video capability is everywhere. And the First Amendment absolutely protects your right to video record law enforcement in public as long as one does not interfere with officers legally carrying out their duties. Seeing is believing for most people. And video preserves an incident fo all to see.

Help Fight Profiling in PA and Across America

What can an individual immediately do to help fight motorcycle profiling in Pennsylvania and across America? Participate in the National Motorcycle Profiling Survey 2018, which helps the fight against motorcycle profiling! It only takes a few minutes to impact legislation nationwide!