The National Council of Clubs, representing the interests of motorcycle clubs and thousands of their members in every state in America, is both concerned and appalled at recent reports of Veterans organizations, including some VFW, American Legion, and Eagles posts, among others, denying access to individuals expressing membership in motorcycle clubs.

So what’s the solution? The Texas Council of Clubs & Independents recent campaign in response to a policy of discrimination announced by the state VFW serves as an example of a successful strategy for others facing similar acts of discrimination by private Veterans organizations in their states.

Dated October 2019, the Department of Texas VFW sent General Orders to all VFW Posts throughout the state outlining a new written policy which includes a provision excluding all 1% MC members, employing gang labeling, from VFW events and property.

The TCOC&I quickly became aware of the General Orders through local VFW posts in numerous areas of the state and immediately began a campaign responding to the new policy of discrimination. Motorcycle clubs have a long history of having events at VFW posts, many motorcyclists are members, and relationships are strong in many places in Texas, as they are throughout America. 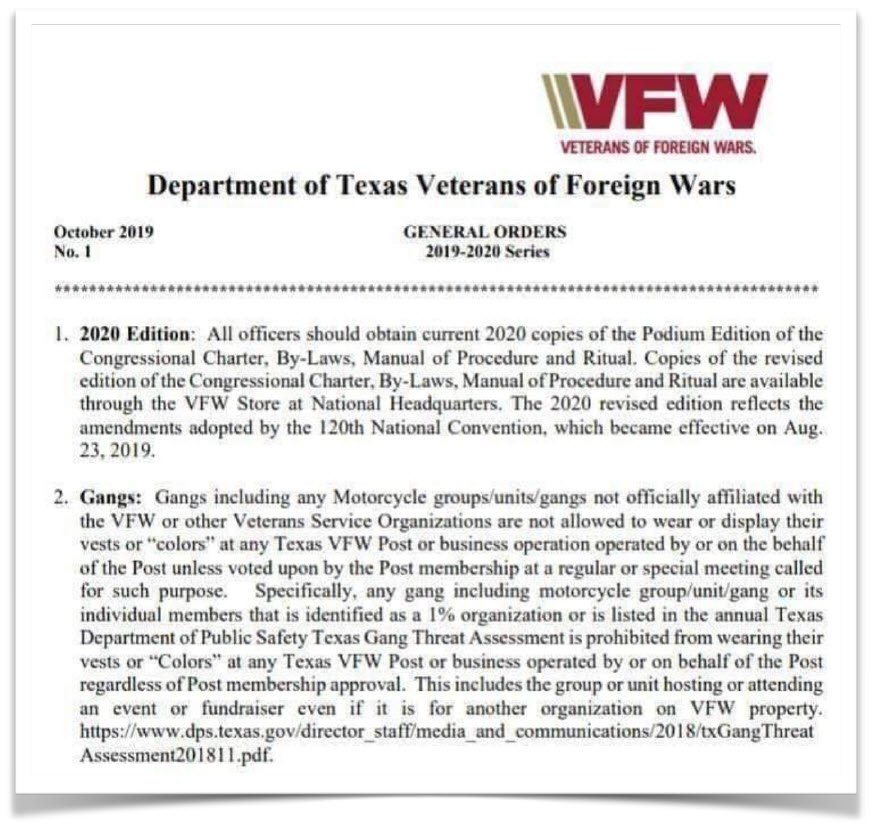 Representatives of the TCOC&I began spreading the VFW letter through social media channels. Thousands in Texas and across the country became aware. On October 9th, a direct response from the TCOC&I in the form of a formal letter was sent to the Texas VFW outlining the community’s request that the policy be reversed. The TCOC&I emphasized the historical ties between the MC community and VFW’s throughout Texas. 38% of the club community are Veterans, more than five times the national average. MC meetings, benefits, and social events are a common occurrence.

According to a TCOC&I representative, this letter resulted in a meeting between representatives of both the Texas VFW and TCOC&I, including the local Austin VFW President. On Saturday, October 12, 2019, the TCOC&I emphasized the importance of not allowing the actions of the few influence how the VFW regards all motorcycle clubs, including 1%’ERS, and how they are treated. The TCOC&I also made a formal request for written explanation of the specifics that led to the General Orders and confirmation of a policy reversal. VFW representatives committed to bringing the TCOC&I’s concerns to Keith King, Texas VFW State Commander. 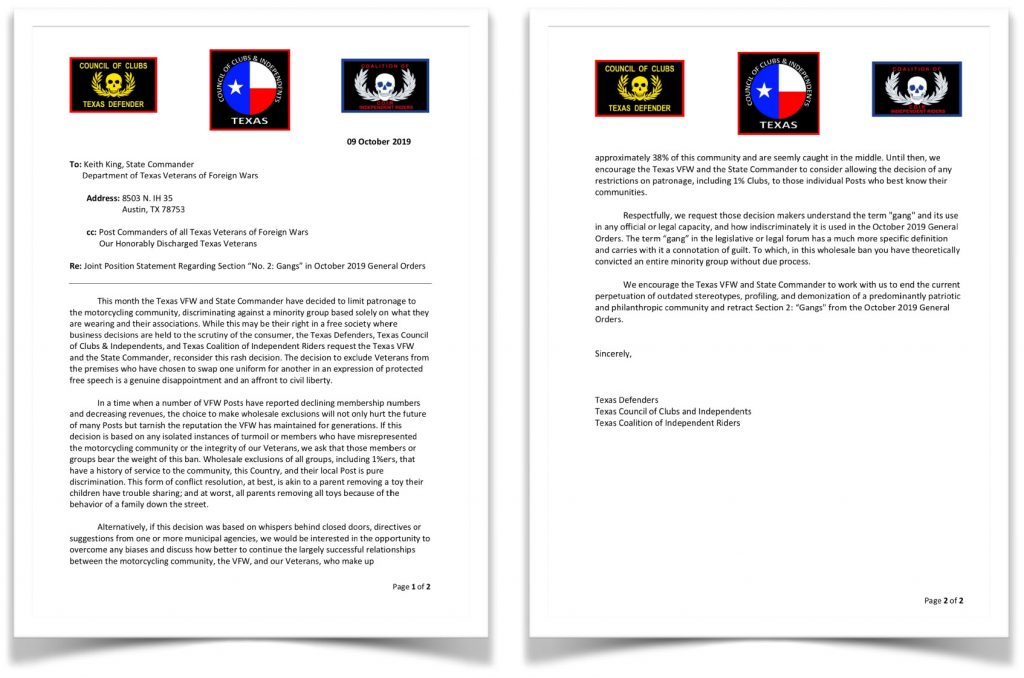 On October 22, 2019 Paul Landers, representing the TCOC&I, reached out to the Texas VFW for an update or statement following the October 12 meeting. Landers was notified that King would meet the following day to personally discuss the General Orders at Issue.

After meeting on October 23 the VFW State Commander opened his mind and listened, according to. Landers.

“King explained that the policy was due to publicized incidents of violence and 1% MC’s in Texas. But after listening to our perspective he changed his perspective. The actions of the few should not impact the rights of the whole.  King agreed to a written policy change that does  NOT exclude MC’s and 1% clubs from VFW property”, says Landers.

The Texas VFW Commander King writes, “The Texas VFW leadership met with representatives of the Texas Council of Clubs & Independents about General Order #2 issued October 2019 and received input from them that further clarification was requested to separate “Gangs” from MC’s. Motorcycle Clubs are Not Street Gangs. This was a very informative meeting with all attending sharing valuable information concerning the groups

We all agreed that our organizations did many good things for the communities in their areas. We all agreed that respect for one another is vital. As the original General Order stated, posts will have the right to permit the groups they have good working relationships with on their property. Notice that this means they will have the right to wear their patch as well if the post allows it. We all agreed to police ourselves. We believe that by working together we can strengthen our community involvement as many riders are in fact veterans themselves.

We hope this clears up the situation concerning motorcycle groups and the VFW in Texas.”

A model response to discrimination

The TCOC&I serves as a model example on how to respond to Veteran organization discrimination against the motorcycling community.

First, social media channels were flooded with the VFW’s General Orders in order to increase awareness and generate independent complaint streams. The more individuals that reach out and complain means the more leverage an oﬃcial complaint will have.

Second, an oﬃcial complaint and request for policy reversal was drafted and sent to the Texas VFW. The complaint outlined the close connection between MC’s and Veterans and argued the VFW is profiling and discriminating against the very people they exist to serve.

Third, meetings were arranged with VFW representatives in order to resolve the issue. Capable spokespersons persuaded the VFW to not punish all MC members for the actions of the few. The final result was a reversing a discriminatory policy.

The entire TCOC&I campaign was implemented and completed within days of the original letter being sent by the VFW. The campaign was cost-free and 100% relied upon active volunteer participation.

The shortsighted policy of excluding MC’s from Veteran’s organizations is appalling and unacceptable. Many in the MC community are loyal veterans, and Americans, and should not be the target of discrimination at home, particularly at the hands of other Veterans.

The TCOC&I blueprint can be modeled and implemented anywhere, in any state. No need to recreate the wheel.