Home News Texas Cops Harass Motorcycle Club Fundraiser for Veterans
November 27, 2018December 18, 2019By Motocycle Profiling Project
One of the long-term implications of the Waco biker massacre that occurred on May 17, 2015 is the continuing erosion of the rights base of motorcycle clubs in Texas. Over 3 years after 9 people were killed at a Twin Peaks restaurant in Waco, and nearly 200 individuals were arrested and given $1-$2 million-dollar punitive bonds, charges have been dropped against all but 24 persons, and recent reports indicate the high likelihood that most of those will be dismissed as well.

Despite these dismissals, motorcycle clubs are still being profiled and harassed while participating in Constitutionally protected political and charitable gatherings. And at ground zero, members of motorcycle clubs in Texas have endured extensive harassment without cause.

Motorcycle clubs participating in an organization called the United Clubs of Waco (UCoW), recently attended a Copperas Cove City Council meeting to report to council members the extensive harassment and profiling that occurred at a recent charitable event to raise funds for Veterans sponsored by the UCoW. Charitable events are explicitly protected by the First Amendment to the US Constitution and actions impacting participation or participants in such events are prohibited. Violations also expose law enforcement, and in turn the state of Texas, to exorbitant civil liability claims, such as the hundreds of millions in claims currently pending related to Twin Peaks.

Legislative action prohibiting the practice of motorcycle profiling, particularly following the Twin Peaks incident, is an empirically a simple solution that reduces incidents of profiling with zero negative fiscal impact.

According to local news media reports, the chairman of the United Clubs of Waco, Frenchy Brea, was joined by more than 20 fellow motorcyclists on November 20th at the regularly scheduled Copperas Cove City Council meeting. 1

The Copperas Cove Silverbacks, one of the 70 clubs that belong to the United Clubs of Waco and the Killeen nonprofit We Leave No One Behind, reported to the council that the Copperas Cove Police Department had an over-the-top presence that dissuaded residents from attending a bike washing fundraiser in support of veterans Sept. 17 at the nightclub TrackSide on Joe’s Road off U.S. Business Highway 190.

“Your police department is attempting to profile, harass and intimidate motorcycle clubs,”

“Squad cars lined around the property, and eight police officers and several Department of Public Safety officers could be seen inside the club.”

“They staged their vehicles just off the property and created the appearance that something was going on at this establishment, causing several groups who were planning on attending this event to turn around. This, in turn, took money away from the fundraiser.”

“There were things that were done and decisions that were made that negatively affected the motorcycle club’s ability to sponsor our charity.”

“We provide person-to-person contact continually … the prejudice that was used against the individuals in the motorcycle club, who were doing something to benefit the community on a whole — is that a good thing to do? Should we allow preconceptions to affect our decision-making process?”

Supreme Court precedent clearly  establishes  that  charitable  appeals  for funds…are within the protection of the First Amendment.”2    Sponsoring and supporting charitable community events, like the solicitation of funds, “is characteristically intertwined with informative and perhaps persuasive speech seeking support for particular causes or for particular views on economic, political, or social issues.” Id.

When motorcyclists are harassed while involved in a charitable fundraising event federal courts have said that “a reasonable jury could find that they were entitled to some constitutional protection based on the specific activity they were engaged in,” and an individual’s association with a motorcycle club “for that purpose was also protected by the First Amendment.” 3

The Need for Legislative Protection

The harassment being experienced by members of the UCoW is a microcosm of the larger motorcycle profiling epidemic enveloping nearly the entire state of Texas. Independent of the victims being damaged by civil liberty violations, these incidents also expose law enforcement and government entities to massive financial liability. Statistics validate the epidemic. The National Motorcycle Profiling Survey 2017 further exposes widespread targeting of charitable and political events. 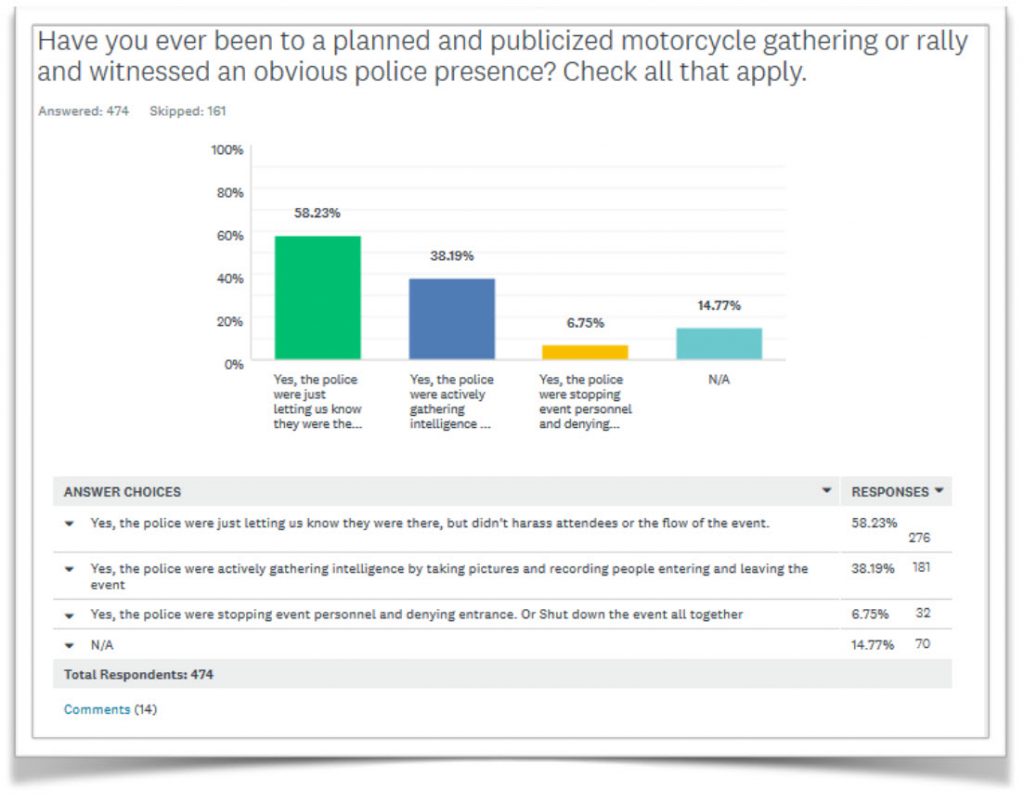 Fortunately, a simple and cost-free legislative solution exists. Washington State, the first state to adopt legislation against the practice, is the only state in America that has recorded a reduction  in  motorcycle  profiling  incidents  since  2012.  4   An explicit prohibition against motorcycle profiling combined with a mechanism of relief for victims of profiling would substantially reduce these incidents from occurring in the first place.